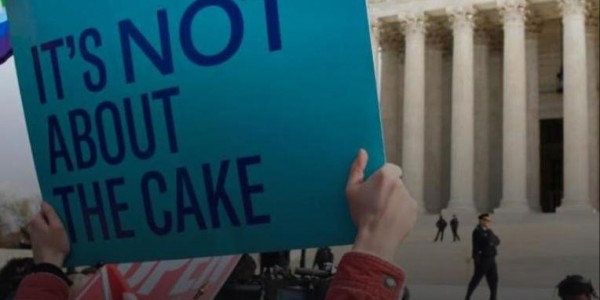 Slicing Up the Masterpiece Cakeshop Decision: A SCOTUS Update

One of the most closely watched cases on the Supreme Court’s docket this term was Masterpiece Cakeshop, Ltd. v. Colorado Civil Rights Commission. The facts of the case were relatively simple—Jack Phillips, a Colorado baker, refused to make a custom cake for a same-sex couple because he believed that doing so would violate his religious beliefs. The Colorado Civil Rights Commission found that the baker’s refusal to make the wedding cake violated Colorado’s antidiscrimination laws, a decision which was upheld by the Colorado courts.

The case presented the possibility that the Supreme Court would make wide-swept pronouncements regarding the competing rights claimed by each side.   Although the Supreme Court found in favor of the baker and concluded that the Colorado Civil Rights Commission violated the baker’s First Amendment right to the free exercise of religion, the Court stopped short of answering two of the bigger questions presented in the case: (1) whether sincerely held religious beliefs must yield to a state’s interest in protecting the rights of same-sex couples from being free from discrimination; and (2) whether compelling the baker to make a wedding cake for a same-sex couple constitutes state-mandated speech which violates the baker’s First Amendment right to free speech.

Instead, the Supreme Court, in a majority opinion authored by Justice Anthony Kennedy, rested its decision in favor of the baker largely on its conclusion that the Colorado administrative agency that ruled against Phillips treated him unfairly by being too hostile to his sincerely held religious beliefs. The Court’s decision invoked the universal principle that constitutional claims must be heard before a neutral tribunal, and the Court found that many of the statements made by members of the Colorado Civil Rights Commission indicated a lack of respect for the baker’s religious objections to same-sex marriage.  The Court found that the administrative agency considered the case without “the religious neutrality that the Constitution requires,” and violated the State’s duty under the First Amendment not to base laws or regulations on hostility to a religion or religious viewpoint.

Justice Kennedy, the author of some of the court’s most important gay-rights rulings—such as Obergefell v. Hodges, which recognized the right of same-sex couples to marry—pointed out the conflicting principals implicated in the case.  On the one hand, society has recognized that “gay persons and gay couples cannot be treated as social outcasts or as inferior in dignity and worth,” and their rights are protected by the Constitution. On the other hand, “the religious and philosophical objections to gay marriage are protected views and in some instances protected forms of expression.”

But even if those religious objections are protected, Justice Kennedy explained, the Supreme Court’s precedents make clear that in some cases the right to the free exercise of religion is not absolute and can instead be limited by neutral laws that apply to everyone.  This is a critical concept which lies at the core of prior cases which held, for example, that the free exercise of religion could not be used to thwart racial desegregation or prohibit interracial marriage.  However, Justice Kennedy noted there are times that sincerely held religious beliefs outweigh neutral laws—for example, a member of the clergy who objects to same-sex marriage cannot be required to perform such marriages.  The Court warned, however, that such exceptions cannot be allowed to swallow the rule, as that could result in “a long list” of people who would be allowed to refuse to provide services for same-sex marriages.

The essential question of when and how Phillips’ right to exercise his religion can be limited had to be determined in a proceeding that was not tainted by hostility to religion.  Because the Colorado Civil Rights Commission deprived Phillips of the “neutral and respectful consideration to which Phillips was entitled,” the Commission’s order – which, among other things, required Phillips to sell same-sex couples wedding cakes or anything else that he would sell to opposite-sex couples and mandated remedial training and compliance reports – “must be set aside.”

But the Court’s opinion left open the possibility that a future case could come out differently, particularly if the decision maker in the case considered religious objections neutrally and fairly. Other cases, the Court emphasized, “must await further elaboration in the courts, all in the context of recognizing that these disputes must be resolved with tolerance, without undue disrespect to sincere religious beliefs, and without subjecting gay persons to indignities when they seek goods and services in an open market.”

The Law Firm of DiOrio & Sereni, LLP is a full-service law firm in Media, Delaware County, Pennsylvania. We strive to help people, businesses and institutions throughout Southeastern Pennsylvania solve legal problems – and even prevent legal problems before they occur.  To learn more about the full range of our specific practice areas, please visit www.dioriosereni.com or contact Lisanne L. Mikula, Esquire at 610-565-5700 or at [email protected].

“My little dog—a heartbeat at my feet.”      -  Writer Edith … END_OF_DOCUMENT_TOKEN_TO_BE_REPLACED

By: Laurie A. McCarthy, Esquire [email protected] Show Up – … END_OF_DOCUMENT_TOKEN_TO_BE_REPLACED